Two years ago I planted two dwarf cherry trees. They are both varieties that are recommended for Western Washington. The are both doing very well.

The ‘Glacier’ tree is loaded. The ‘Kristen’ tree is also producing well for a 2nd year tree.

3 years ago I planted a ‘Lapins’ cherry which is producing lightly this year. It is a full size tree, which scares me a bit. They get very large. But the ‘Lapins’ seems to be working for this area too. None of the varieties have been bothered by birds, only a few cherries have splits, and they are all delicious! If I had to pick a favorite at this point it would be ‘Glacier’ since it is producing the best and the cherries are large and the tree is lush.

I created the designs in Adobe Illustrator and printed out the patterns to use as templates for cutting the glass and laying out the pieces. Then the glass pieces are placed at the bottom of the mold, upside down, and concrete is poured over the top of the glass pieces.

I don’t actually “step” on these.

I’ve created some with smaller glass pieces that I’ve put in traffic areas that get stepped on. The glass pieces in these are larger and I’m afraid they will crack if they get a lot of traffic. 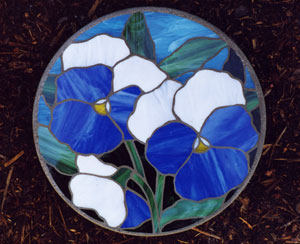