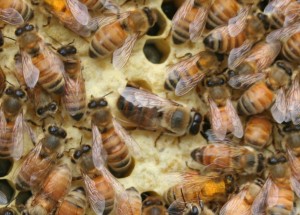 Both colonies are still taking plenty of sugar syrup. 45 pounds so far! I guess this is not unusual. I think next week I will need to add the second-story deep brood boxes to the hives. Today both hives still have 4 or 5 frames not drawn out with comb.

I spotted a drone again today. Look how big his eyes are! 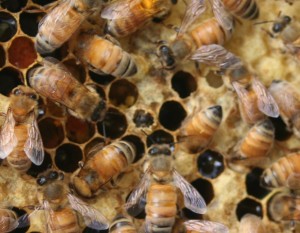 I also spotted a bee chewing her way out of a cell. She’s right in the center of the photo. 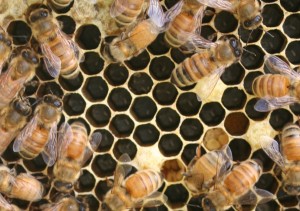 A honey bee develops from egg to newly emerged adult in approximately 21 days (Range: 18-22days) for a worker bee or 24 days (drones) or 16 days (queen bee). So if I released the queens 21 days ago, there could be newly emerged workers today. I was surprised to see bees in the hive today that looked smaller and lighter colored than the rest. They have more fuzz between where their eyes are and where their wings attach. They hold their wings in towards the center of their bodies. Their abdomens are lighter colored and smaller, not as shiny and the stripes are not nearly as defined. (You can see one of these in the photo, near the top center.)

I noticed a bee at the entrance fanning. She was just standing in one spot (right in the center of the entrance) beating her wings so fast you could not see them. The other bees (busy because it was a hot day!) were pushing past her. She was kind of in their way. I decided to switch the entrance reducer to its middle position, allowing a larger entrance for the bees. When I was removing it, (no gloves or safety gear) I repositioned my hand so that I could get a better grip and did not see the bee on the other side. She stung me. My first sting. tip of my middle finger. Smarted for a few minutes but that’s all. I waited till the bees quieted down for the evening before put in back in. When I went to push it back in, just making a little noise, lots of bees came out to just inside the entrance, and just looked at me. Some of them were upside down, all lined up and looking out – so cute.

Fanning is done for the purpose of regulating the temperature (they keep it at 93-95F) in the hive and also to help in curing (removing moisture from) the honey. I was describing to my daughter what fanning was and she said “they’re so smart”. I know it is instinct but how do those particular bees know to do this?

My raspberries are coming into bloom, and my bees love them! Also they are mobbing my holly tree. I’ve seen a few on my rosemary, forget-me-nots, and heather as well.

I also spotted a drone. He was outside the entrance, and crawled in, so I assume he was out flying. He looked large, bumbly and comical compared to the svelte and graceful sisters. I laughed. But I also wondered if he flew in from somewhere or if he came with the package? I hadn’t seen any drones at all yet. 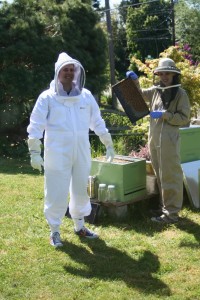 Mothers Day today. My daughter Kelsey and her husband Sean came to visit and helped me with the hive inspection. Beautiful warm sunny day again today. 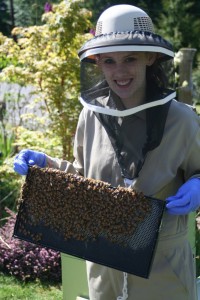 I have 2 extra sets of safety gear so we all suited up and had a great time inspecting the frames.

Lots of capped brood! New eggs too, and brood in all stages in between.

We spotted the queens in both hives. I was not expecting this because last week I looked and looked and didn’t see either one. Sean spotted the FlashMob queen on the side of a frame and I spotted ‘The Others’ queen. 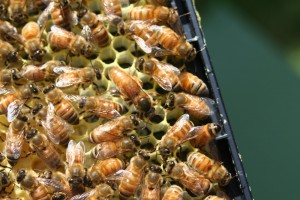 You can see the queen in this photo near the center. She is longer/larger and has a pointed abdomen.

Lots of capped brood in this photo. 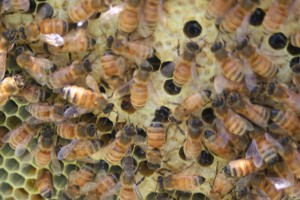 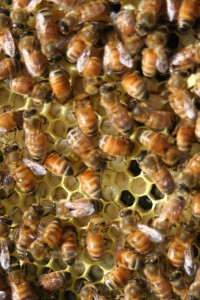 You can see large larvae in most of the cells in this photo. 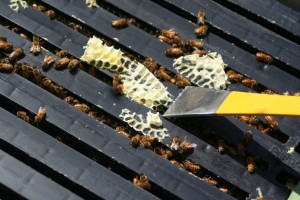 I put the inner cover on shallow side up by mistake last time I filled the feeders on The Others. They built some extra comb on top of the frames which we removed and saved for candle making.

On my jog-walk last weekend I was noticing flowers on plants that I never really noticed before. So much is in bloom right now. In the wild areas around here blooming now are salmonberries, wild blackberries, trillium, bleedingheart, elderberry, scotch broom, vetch, huckleberries, maple of different varieties, and more. I wish I knew which ones my bees are visiting. 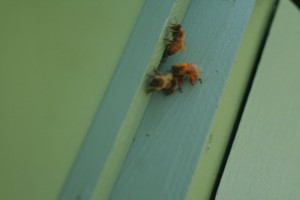 I watched them today coming in all day long with pollen. Many different colors: tan, off-white, yellow, bright yellow, brownish, and this neon-bright orange, Some of the bees with this bright orange pollen were also covered all over with more of it. 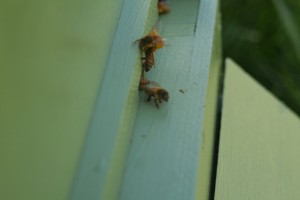 Some were so heavily loaded that they had a little trouble getting back in the hive. One I saw on the landing board trying to crawl up the slope, then slid off into the grass. With difficulty she finally took off and landed back up by the hive entrance with her booty. 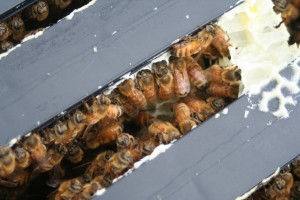 Opened up the hives to check on the queens, make sure that they survived. Our extra safety gear arrived so Garrett helped out. 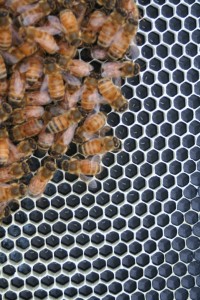 Each hive had the center frames build halfway up with comb and many had nectar, a few had pollen, and many with eggs. A good pattern of one egg in each cell, with no multiples. I’d only be happier if I had actually spotted the queens! They’re obviously thriving. 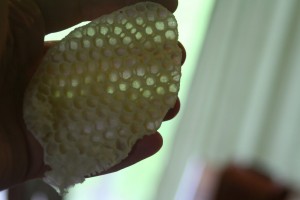 FlashMob had 2 of the center frames spaced too far apart last time I closed up the hive. They build a beautiful piece of comb between the frames that I had to reluctantly remove. Cool to look at though. I made sure to gently crowd the frames snugly together this time. 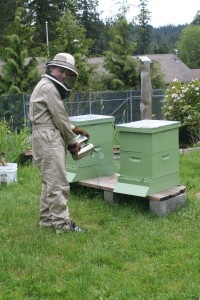 When I bought the frames, they suggested black frames for the brood boxes. It makes it much easier to spot the eggs. Now I can see that it would be very difficult to spot eggs on a white or light colored base. And this was my only way of knowing today that my queens were alive and well.