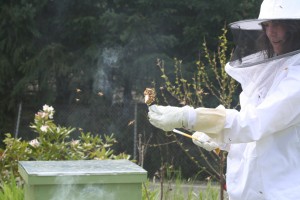 Opened up the hives to release the queens. They were very calm. Garrett took pictures.

Lots of activity around the entrances – we have had a few partially sunny days. The queens look healthy. We named the NE colony ‘FlashMob’.
Garrett had said he liked the ‘FlashMob’ colony better than the other one when they were still in the cages. He said ‘They look more organized’. I noticed they seemed a bit peppier than the other colony at first. The SW colony is named ‘The Others’. When I lifted their queen cage out to remove the cork and release her, there was a chain of bees clinging to the cage and each other about 4″ long. Reminded me of those plastic toy monkeys. (‘Barrel of Monkeys!’) 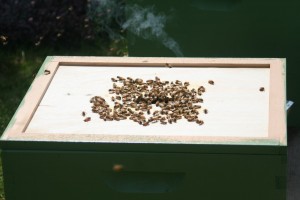 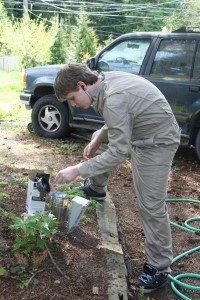 Lighting the smoker! The book said to put in paper, then put in twigs for kindling, tend the little fire for 10 minutes to get it going! Say what??? Bob Combs, the instructor for the class I took at Meadowbrook said to just get a propane torch. I am now the proud owner of a propane torch. Garrett likes it. 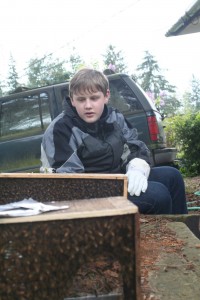 We are now the proud hosts of 2 colonies of sweet mild mannered Italian honey bees. Hived them yesterday. My daughter Anita took some great pictures. The extra safety gear didn’t arrive in time so she had to go veil-less. Not a touch of fear. She’s a natural. No stings at all. I
guess this is typical – they have nothing yet to protect. No honey, no brood. 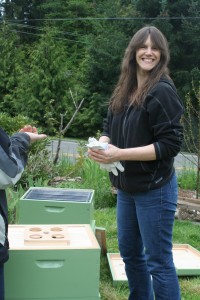 ‘We cannot put off living until we are ready. The most salient characteristic of life is its urgency, “here and now” without any possible postponement. Life is fired at us point blank.’ — Jose Ortega Y Gasset – (Spanish Philosopher)

I was reading a little about his philosophy (thanks Wikipedia):

Jose Ortega y Gasset wrote that “life is at the same time fate and freedom, and that freedom is being free inside of a given fate. Fate gives us an inexorable repertory of determinate possibilities, that is, it gives us different destinies. We accept fate and within it we choose one destiny. In this tied down fate we must therefore be active, decide and create a ‘project of life’—thus not be like those who live a conventional life of customs and given structures who prefer an unconcerned and imperturbable life because they are afraid of the duty of choosing a project.” 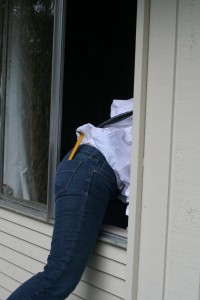 In all the excitement, we locked ourselves out of the house. The hive tool came in handy! Before it was ever used on the hive!

The buzz around basecamp these days is Avatar the Last Airbender – M. Night Shyamalan is making a trilogy the first of which comes out on July 2. We are watching the original cartoon series right now. In a book 2 episode, Prince Zuko is complaining to Uncle Iroh about their present circumstances.

Zuko says “..This city is a prison. I don’t want to make a life here.”
Wise old tea swilling fire bending peace loving Iroh responds: “Life happens wherever you are whether you make it or not.”

This is the queen from our ‘FlashMob’ colony. She will need to stay in her cage for a few more days. They have only been together for 1 day and if she is released now,they will most likely kill her! 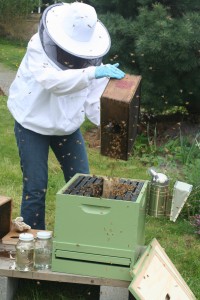 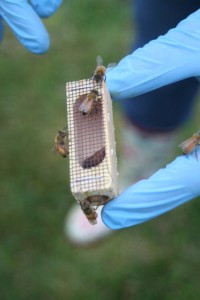 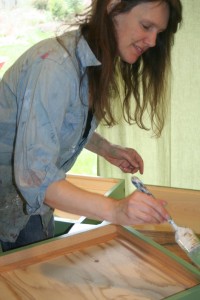 Arriving tomorrow:
2 packages of sweet tempered Italians!
Hives are assembled and ready, safety gear is good to go, site with good morning sun selected.
My beekeeping 101 class was last weekend. A 2 day class at Meadowbrook Farm in North Bend, through the Puget Sound Beekeepers Association. There is an apiary there and part of the class included a demonstration of installing a new package of bees. Just what I needed. I never really had any fear of the whole concept of being surrounded by the little darlings but I was a little intimidated by the whole concept of being responsible for them. I’m ready now. The class was just what I needed. Still a lot to learn. 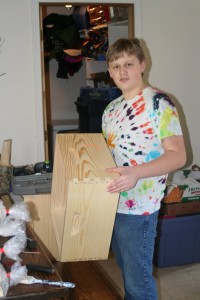 My son helped assemble the boxes

One of my honey supers is not square. It is skewed by about 1/8 inch. I think this is the one I assembled with only half the nails (I ran out) and put them in later after the painting was done. Doesn’t seem like a big deal and probably will be fine. ‘Bee space’ is very important in a hive, any less than 1/4 -3/8 inch they will fill with propolis and any more, they will fill with burr comb. But I’ve heard the spacing on the outside edges of the hive is not so important as in the center so I’m not going to rip my box apart and reassemble. I am, however, now the proud owner of a carpenter’s square.

Last week, I ordered bees. I placed an order for 2 packages of 3 pounds of bees each and each and each with a queen. They will be arriving at the apiary supply store in 2 weeks. Lots to do.

I signed up for a class for next weekend. (At Meadowbrook Farm in North Bend) Last weekend I made the first trip down to the apiary supply store – BeezNeez in Snohomish – (so pleased to find one local and so close, they are few and far between) and purchased brood boxes, honey supers, bases, roofs, for 2 complete hives. The staff were so helpful! I think they would have spent as long as I needed them too answering my questions.

And then I spent most of the weekend assembling, painting, selecting a location for the hives (lots to consider).

Until one is committed
There is hesitancy, the chance to draw back
Always ineffectiveness.

Concerning all acts of initiative (and Creation)
There is one elementary truth
The ignorance which kills countless ideas and splendid plans:

That the moment that one definitely commits ones self
Then Providence moves too.

All sorts of things occur to help one
That would never otherwise have occurred.

A whole stream of events issues from the decision
Raising in one’s favor all manner
Of unforeseen incidents and meetings
And material substance
Which no one could have dreamt
Would have come your way.

Whatever you can do or dream you can, begin it.
Boldness has genius, power and magic in it.